Kristin was initially surprised to find herself seeking treatment by Dallas IVF, but a diagnosis of endometrial polyps had derailed her prospects of growing her family 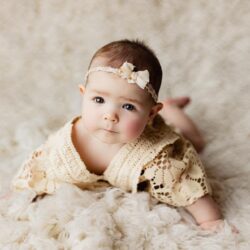 Despite already having a healthy five year old with no pregnancy complications, nothing about Kristin and Daniel’s journey to grow their family further was textbook.

Kristin first experienced symptoms of endometrial polyps in the inner wall of her uterus – irregular periods and abdominal pain and pressure – in late 2017. At first, she thought it was a result of having her first baby and, as time went on, just the joy of being an aging woman. However, she grew more concerned as time went on and finally raised the issue to her OB/GYN during her annual exam.

Knowing the couple was thinking of having another child, her provider quickly ordered an ultrasound to confirm uterine polyps, also known as endometrial polyps (the lining of the uterus is called the endometrium). The ultrasound confirmed their presence, and the OB/GYN recommended that Kristin and Daniel suspend trying to get pregnant until treatment.

Uterine polyps, unlike uterine fibroids, do carry a risk of becoming cancerous (about 2% in premenopausal women). Moreover, depending on the size and number of polyps, they can reduce the chances of getting pregnant and/or increase the risk of miscarriage.

“I have a lot of cancer on one side of my family so I knew just having that chance of cancer in general carried more risk with me,” Kristin explains. “It was overwhelming, you know, just knowing that, Hey, I just wanted to extend my family and now I’m getting tested for uterine cancer. It was a lot.”

Knowing they were looking to have another child, Kristin’s provider quickly recommended not only surgery to remove and test the polyps, but also that the procedure be performed by Dallas IVF’s Dr. Dara Havemann, who was highly experienced in gynecologic surgery.

“He told me she was the best of the best, and that I was in good hands with her,” Kristin recalls.

Devoted to you, dedicated to your success

Fertility surgery for polyps, cancer testing and getting the OK to try to get pregnant again

Kristin was admittedly surprised and concerned to get a referral for a fertility specialist on top of a worrisome diagnosis. But she quickly realized that she was in the right place and under the right doctor’s care.

“She confirmed the diagnosis and gave me a game plan – these are the options; this is what we need to do. You let ME know when YOU are ready,” shares Kristin. “I like that she didn’t pressure me into anything and wanted to make sure that I not only understood everything but also my husband. And we called a few weeks later and told her, alright, we’re ready to go.

“I couldn’t have asked for a better doctor to go through all of this with me. She treated us as people, as friends … not a patient or a diagnosis,” Kristin adds.

With a game plan in hand, Kristin underwent surgery to remove several polyps, two of which, due to their location, would have caused infertility or a miscarriage. The polyps were also tested and, fortunately, were not cancerous.

Afterward, Kristin underwent a full examination and round of hormone testing to ensure that there were no potential fertility issues.

“Everything came back normal except for my prolactin levels, which is a hormone involved with milk production. So as a woman who wasn’t breastfeeding, that was a concern,” recalls Kristin. Since prolactin is produced in a gland in the brain, Kristin’s levels also raised flags for a possible brain tumor. “So after that I went through more testing.

“Thankfully, everything checked out – for some reason I just have higher levels than the average person,” says Kristin, who was greatly relieved by the finding.

With a polyp-clear and cancer-free screening, Dr. Havemann gave the couple the OK to start trying for another baby. However, since uterine polyps tend to grow back – bringing back the risk for infertility – she gave them the all-clear for only six months. Longer, and Kristin may have needed another procedure.

“We really had the pressure that if we wanted to have another baby, we’d have to do it now,” Kristin recalls.

They didn’t have to try long, and in December 2019 they found out they were pregnant. Sadly, the joy was short-lived.

“We got the news in January that we lost the baby,” Kristin says. “Unfortunately, that happened, and as the person who goes through that it’s only normal to blame yourself – even though there was nothing I could have done to prevent it.”

Miscarriages are common and most often occur when an embryo has an abnormal number of chromosomes, either too few or too many.

“Of course, I beat myself up over it for a while, and I was hesitant to try again. I wasn’t sure If I could go through it again,” admits Kristin. “[Dr. Havemann] reminded me constantly, you know, things happen, unfortunately, and don’t give up. She was there to support us and would be there if we wanted to have another try.

“I talked it over with my husband, who wanted to give up on giving our older daughter a sibling. Then I thought, I didn’t go through getting tested for uterine cancer and hormone testing and have a miscarriage for nothing. I wanted to keep trying.”

Amidst a pandemic, anxiety and daring to choose joy after a startling loss

Try they did, and received another positive pregnancy result a few months later. While joyous, it also brought fear and concern.

At this point, Kristin’s pregnancy results came at the beginning of what would become the largest global pandemic in current history. COVID-19 swept into the United States, causing anxiety for everyone, but also bringing extra restrictions and stress in an already worrisome time. Kristin was especially nervous to go to doctor visits on her own and struggled with the fear that she could miscarry again.

“I had a lot of anxiety in the beginning. At first, I told myself, don’t get too attached to the baby. Yes, we were excited but what if it happens again? I tried to protect myself,” says Kristin. “Each appointment I went to, I could breathe a little easier.

That was a turning point for her. “Going through cancer testing and then going through a miscarriage just reminded me that life is hard, but you only get one life: embrace it. Live every day to the fullest, you don’t know what’s going to happen tomorrow.

“So I just tell myself every day that you’re pregnant just be happy; that you have that time with that baby whether it’s for a few days or a few weeks, just be happy and choose joy every day for that pregnancy. So that’s what I did.”

The precious rainbow baby that made it all worthwhile

In October 2020, Kristin and Daniel welcomed their youngest daughter into their family: Mackenzie.

“The day of the delivery, I was like Wow, we made it,” says Kristin. “We got through this pregnancy, we got through a pandemic. We got this.”

Kristin is quick to give credit to Dr. Havemann’s support. “Without her, I don’t know if we’d have our youngest daughter and I don’t want to think where we’d be without her.”

“It’s hard but I’d do it all over again,” adds Kristin. “Thankfully, we were blessed to have our little girl and we have two little girls now. They keep us very, very busy but very happy.”

Related Reading: causes of infertility
In This Section